Though the calendar says summer doesn't officially start until June, 21st, the warm weather events are already starting to go into full swing in the Blue Water Area.

First, let's take a peek at what's happening in Port Huron this weekend.

Starting at 10 AM on Saturday, June 2nd is Be a Tourist in Your Own Town which features many of Port Huron’s signature attractions and many at no charge. Be A Tourist is a chance for visitors and area residents to discover and rediscover the attractions and history that brands Port Huron the Maritime Capital of the Great Lakes.

See the list of the things to see and do at Port Huron's Be A Tourist In Your Own Town here.

It kicks off at 8 in the morning this Saturday with Run With The Sturgeon, a 5K race and 1K fun run along the beautiful Blue Water River Walk on the shores of the St. Clair River.

At 10 AM the festival opens at the Great Lakes Maritime Center and Vantage Point. Check out the full list of activities at the Sturgeon Festival's website.


Also on Saturday, Harbor Beach's Pro King Fishing Tournament is a going on. It's a contest where all anglers fish with the same spoon.

The summer live theater scene is blossoming again. The Barn Theater in Port Sanilac kicks off their summer season with Louis Black's One Small Hitch. In Marine City, Two Across starts its run a the Snug Theater. Port Huron's Citadel Stage present their production of the Odd Couple starting on June 15.

Looking towards next weekend, Shiny chrome and high gloss paint will be glittering in the sun at Marysville Park. 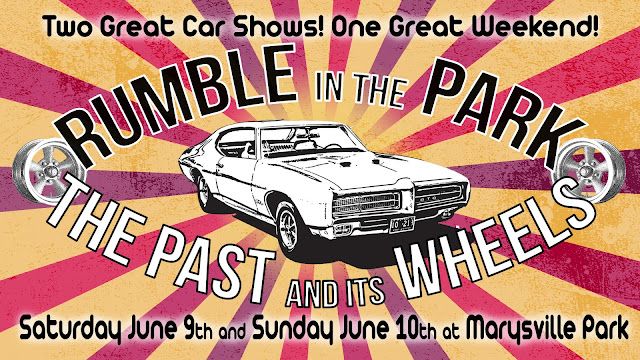 On Saturday, June, 9th see hot rods, custom and muscle cars at Rumble In The Park.  The next day, stock and unmodified rides at least twenty five years old will be shown off at The Past and It's Wheels. This show well known for having quite a few Wills Sainte Claire cars. Wills built approximately 12,000 cars between 1921 and '26 in a Marysville factory. There are only 75 remaining in the entire world.

Just a ten minute drive from Marysville is St. Clair. On the evening of the 9th, you can sip on many hop, barley and malt beverages at the St Clair Beer and Wine Festival.

Also on the 9th & 10th, Art On the River is in happening in Port Huron and Native, Voyageurs & Settlers Days are at the Sanilac County Museum & Historical Village.

Find out more when you Discover The Blue at our events page.
Posted by Dale Merrill No comments:

Email ThisBlogThis!Share to TwitterShare to FacebookShare to Pinterest
Labels: Be A Tourist In Your Own Town, Port Huron, Sturgeon Festival 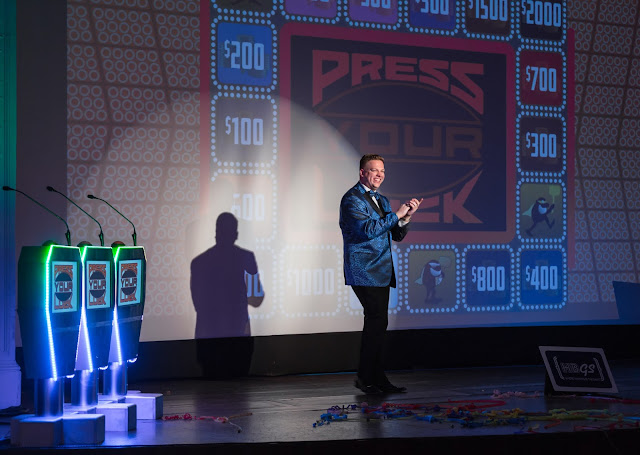 What started as a fun experiment eight years ago, the Harbor Beach Game Show Series has now become a Mother’s Day tradition in the Huron County town. This year show is on track to produce their most advanced and most-expensive show yet. 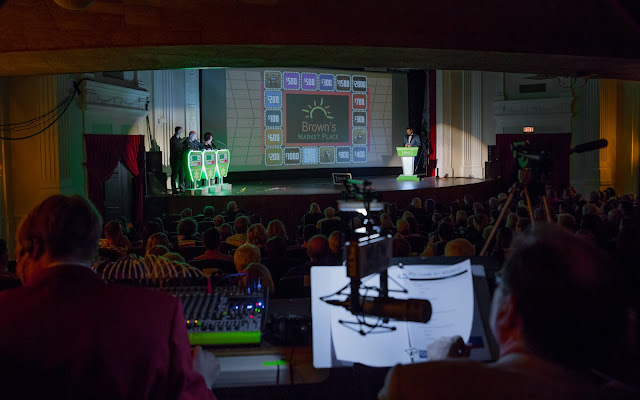 According to Clark Ramsey, the show’s executive producer and host, this year’s production has been in the works for nearly three years. Ramsey said, “When we celebrated our five-year anniversary show, we decided it was time to double down and take the show to the next level. That bet is coming to fruition this year. Our website is finally up-and-running, the ticket sale structure has been updated and the show itself is more technologically-advanced than ever before in our history.” 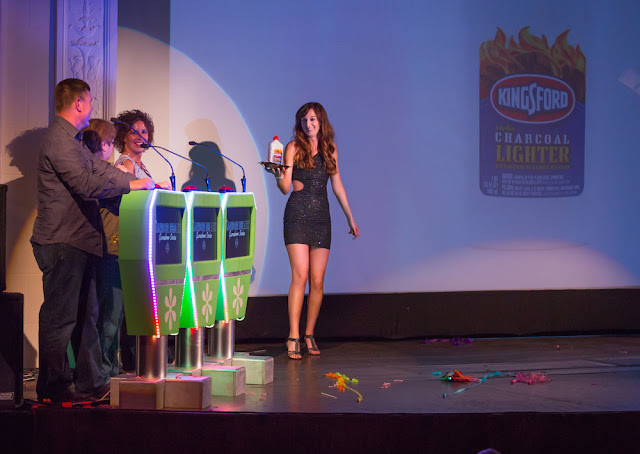 Typically, HBGS debuts a new game to play each year; May 2018 will bring that number to ten: $100,000 Pyramid, Minute to Win It, Family Feud, Card Sharks, Wheel of Fortune, Match Game, Let’s Make a Deal, Password Plus, Press Your Luck and Hollywood Squares. With each game, the set and construction has become more complex, with none greater than Hollywood Squares. 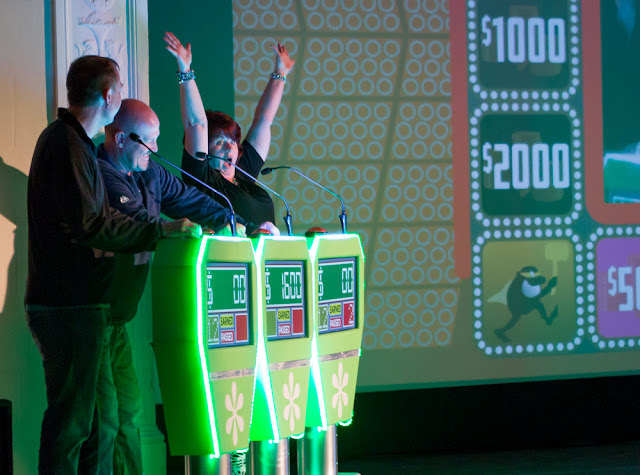 Planning began shortly after Labor Day 2017 and will be the largest and tallest set in the show’s eight-year history. Spanning 21 feet across and 15 feet tall, Hollywood Squares has been in construction since early April. When completed, the set will contain nine video inputs, 450 feet of XLR audio cable, 225 feet of cat6 internet cable and 147 feet of addressable LED lighting – all being controlled by a team backstage. The Hollywood Squares set is an exact replica of what was on television in the early 1970s, with the exception of newer technology. 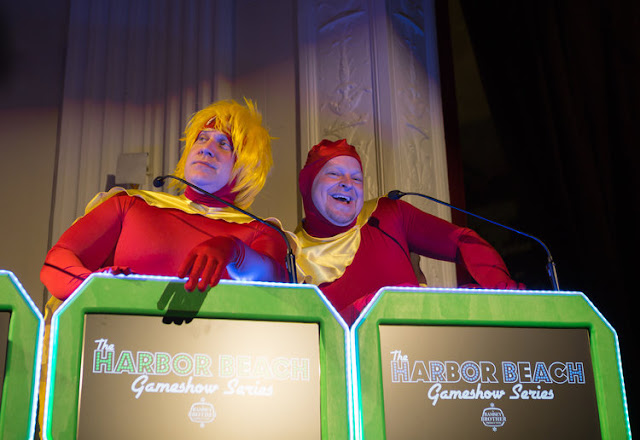 Press Your Luck, which debuted last year, is set to kick off the 2018 edition of the HBGS. Complete with real-life Whammys and a state-of-the-art game board, Press Your Luck has quickly become
a crowd favorite. Ed Klump and Rob Little will be the featured Whammys again this year. On top of being a Whammy, Rob Little, a national stand-up comedian act and Maxim Magazine’s
Comedian of the Year, will warm up the crowd starting at 6:40pm. NBC’s Last Comic Standing called Rob Little the “Happiest Comic in America” and the “Top Cruise Line Comedian” by Carnival
Cruise Lines. 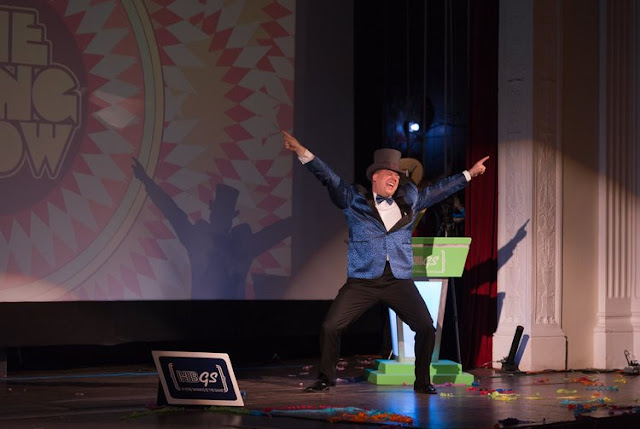 The Harbor Beach Gameshow Series takes place Saturday, May 12th at 7pm at the Harbor Beach Community Theatre. All proceeds benefit the Harbor Beach Maritime Festival. Runtime is
approximately two hours and 20 minutes with an intermission. Tickets start at $15 and can be purchased online at HBgameshow.com
Posted by Unknown No comments: