Boat The Blue in Port Huron this weekend

When crossing over Port Huron's 7th and 10th street bridges this week, your eyes may spot what looks like quite a few vessels dating from the 1940's and possibly even before.

Be assured, your eyes are not deceiving you as Port Huron is the host city for the Antique & Classic Boat Society's International Boat Show this year. 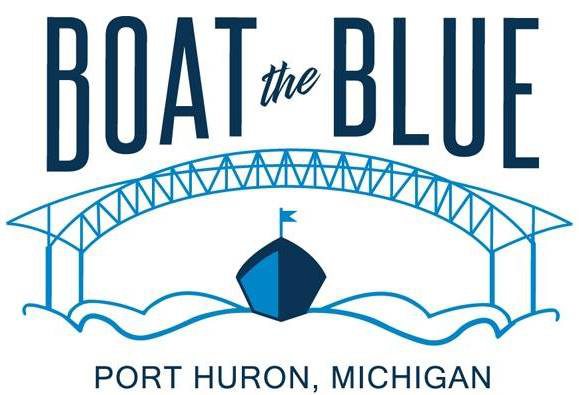 Dubbed Boat The Blue, this event will bring around 200 classic and vintage boats to the Blue Water Area, for a week full of events for its owners and then caps off with open the public show at Port Huron's River Street Marina this Friday and Saturday.

Among the events for the free show this weekend include a Cruiser Open House on Friday and Saturday from 11am – 2pm. There will free boat rides in a classic boat on Saturday from at that time as well.

Events for children including toy boat painting, face painting, Tootsie the clown, minnow races, knot tying, and much more are available on Saturday from 11am-2am.  Free Parking is located at the St. Clair Community College.  A vendor area featuring boat related art, crafts, parts as well as food and drinks will also be available.

Many of the boats on display this week do have plenty Blue Water Area history connected to them.

At the age of 13, Christopher Columbus Smith built his first boat in the city of Algonac. By 1881, his skiffs had been known across the Great Lakes, so he and his brother Frank went into building boats full time. In 1922, Smith and his family formed the Chris Smith and Son Boat Company, producing fast and economically priced runabouts for the general public. During World War II the company, now known as Chris Craft, the company 12,000 military vessels such as patrol boats, utility launches, and rescue vessels for the United States Navy and Army.

Following World War II, the American economy started to grow immensely. Families had more money to spend on fun things.  Boats were high on a lot of people's lists and the company's vessels, from the finest mahogany, their boats were considered to be the best available.

In 1948, Algonac based boat company Chris Craft promoted their new lines of pleasure boats for that year with this ad geared to those who were looking for to enjoy time out on the water. 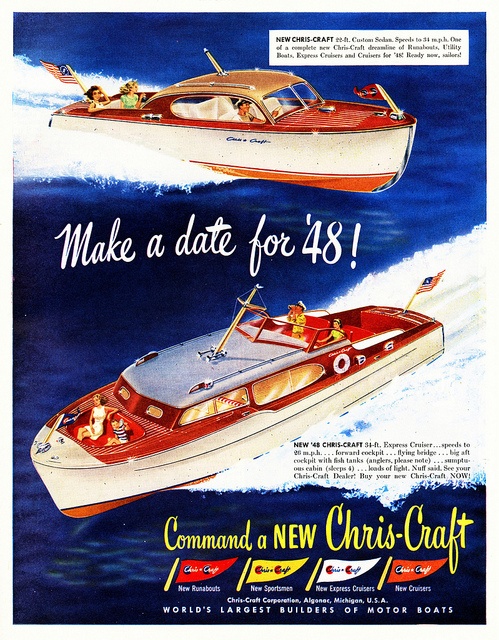 Though Chris Craft built custom vessels for superstars such as Frank Sinatra and Elvis Presley, even their lower-priced boats were known for their high quality by using woods like mahogany and teak as well as having many luxury items most other boats did not come with. Within ten years Chris Craft became virtually synonymous with pleasure boating, offering 159 different models and became the sales leader in many categories of small civilian powerboats.


If you're going to be checking out the boats docked at the marina this week or weekend and posting photos of them on Instagram or Twitter, don't forget to use the hashtags #BoatTheBlue and #DiscoverTheBlue when sharing them. On Instagram, you can also tag them with @boattheblue and @discoverthebluewaterarea.

Find out more about the 2018 Antique and Classic Boat Society International Boat Show: Boat The Blue at their website.
Posted by Dale Merrill No comments: