Discovering Michigan's ThumbCoast In May 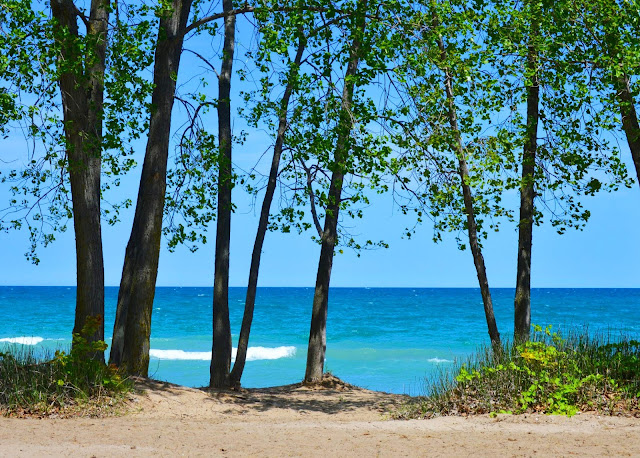 Ahhh, the warm weather months. You’re starting to feel it in the air, aren’t you?

If that, along with the calendar telling us the month of May is about to arrive, wasn’t enough to show signs that the sunny season is straight ahead, the many events going on sure would.

Here's a look at some of the things happening over the next four weeks in Michigan's ThumbCoast. 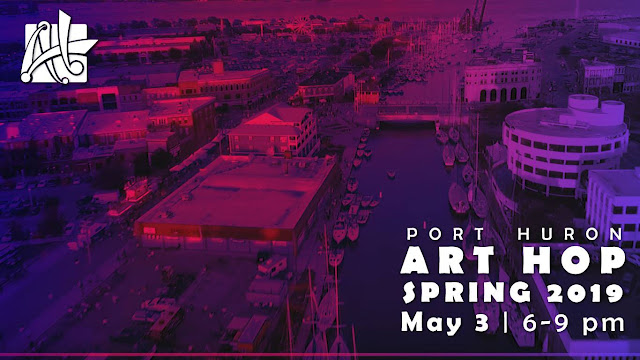 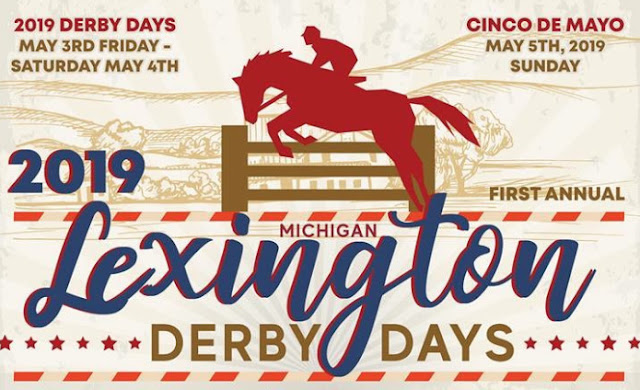 There will be a lot of "horsing around" in Lexington from May 3rd through the 5th.

Derby Days start with a horse parade on Friday at 7pm and most stores downtown will be staying open to 9pm. From 9pm to 2am there will be country line dancing at Steis's Village Inn.


On Saturday, things start with at noon with kid's pony rides until 4pm. At 6pm the derby will be shown on the big screen at Lexington Village Theater.  In the evening the Windjammer will be having mechanical bull riding and there will be live country-rock music happening at Steis's.

Sunday there will be an all day Cinco De Mayo party which will include a Cinco De Mayo Closest to the Pin Challenge at Lakeview Hills Golf Resort.


Remember those old game shows on TV and wished you had been on one of them? Now is your chance! On Saturday, May 11th, The Harbor Beach Gameshow Series brings back the television magic of yesteryear right in the Harbor Beach Community Theatre.

Even if you don't hit the big money at the Game Show Series, you may find the deal of the century at Harbor Beach's Citywide Garage Sale running May 22nd through the 27th.

During Memorial Day weekend celebrate the pageantry, history and flavor of Michigan from 1750-1840.

Port Huron's Feast of the Ste. Claire brings to life four periods of early Michigan history with re-enactors living in historic-style camps demonstrating the daily life of these eras. 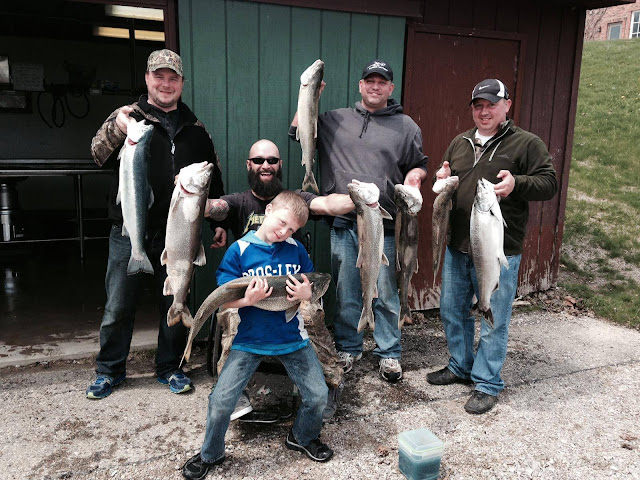 If you're looking to fish, and like a little friendly competition while doing so, the Blue Water Area has several tournaments happening in May.

The MMA Walleye Classic is in Port Huron on Saturday, May 4th as is the Can2Can Tournament in Harbor Beach. From May 17th through the 19th, The Marbleye Classic will be happening in St. Clair.

After a day outside discovering the blue in May, take in a live stage show in the evening.

This weekend the Port Austin Players wraps up their presentation of Neil Simon's God's Favorite and Port Huron's Citadel Stage starts its run of Sherwood: The Adventures of Robin Hood. The Riverbank Theatre in Marine City has its production of Nunsense this month and The Barn Theater in Port Sanilac kicks off their summer season at the end of the month with the Sam Bobrick's classic comedy Annoyance.

Discover more about what's happening in the Blue Water Area at our events page.
Posted by Dale Merrill No comments:

Reeling Them In: It's Fishing Tournament Time! 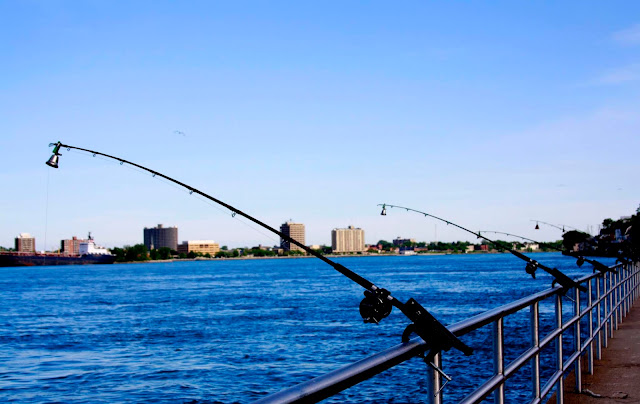 There are countless ways to enjoy the lakes and rivers of the Blue Water Area. For many, it's to cast bait a hook, and reel in the fish. While some enjoy angling for its laid back and relaxing pace, there are others who seek more action and competition in the sport. For them, there are quite a few fishing tournaments happening in the area throughout the sping and into the summer.

The action starts in St. Clair on April 27th. That's when the Blue Water Salmon Stakes happen. The tournament, first organized by Quota International of Port Huron and the Blue Water Sportfishing Association four decades ago, is the longest running contest of its kind in the area.


At the Salmon Stakes anglers will compete for a share of thousands of dollars in prize money for the largest King, Coho, Steelhead, Brown Trout, Lake Trout and Walleye in addition to the “super skipper”.

Fishing is from 6 am to 1 pm by boat on the day of the tournament, with the weigh-in taking place in St. Clair at the Voyageur Restaurant. Potential prize-winning catches will be open for viewing by the general public from 12:00 p.m. until 4:00 pm in the Voyageur’s parking lot, along with great prize raffles and activities for children or all ages.

Proceeds from the tournament go to support various service projects benefitting the hearing and speech impaired and disadvantaged women and children in the Blue Water Area.

You can register for the 2019 Blue Water Salmon Stakes at The Voyageur Restaurant and Anderson’s Pro Bait.  For more information visit the Blue Water Sportfishing Association on the web. 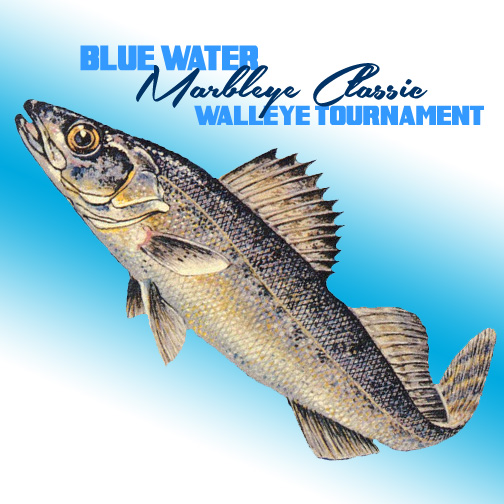 St. Clair is also the host of the annual Blue Water Marbleye Classic which runs from May 17th through the 19th. On this weekend hundreds of fishermen drop their boats and lines into the quick and swift currents of the St. Clair River in hopes of landing the Hog-the biggest walleye during the annual tournament. 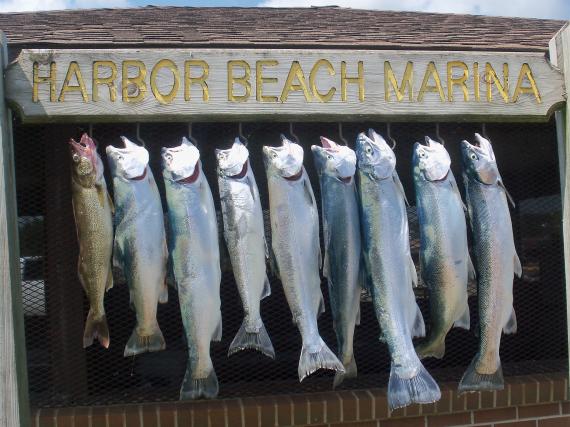 On Saturday, May 4th, many boats and hundreds of fishermen will be on the waters of Harbor Beach for the 2019 Can2Can Fishing Tournament. Hosted by the Thumb chapter of the Steelheaders, proceeds from this event go to help their Net Pen Project, which helps maintain and preserve the fish stock of the region. Visit the Can2Can website for more information and registration. 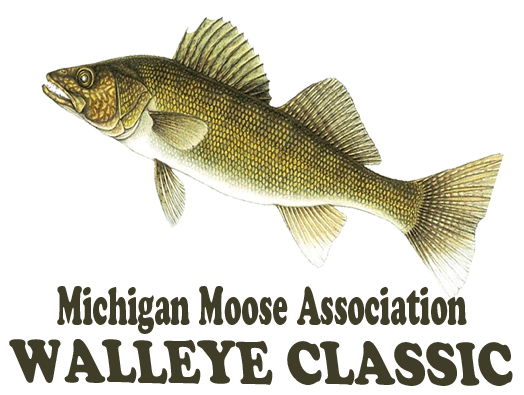 In Port Huron, Moose Lodge #158 invites you to join them for a day of fishing out on Southern Lake Huron and the St. Clair River on May 4th for the Walleye Classic. The best five walleye caught will win prizes. 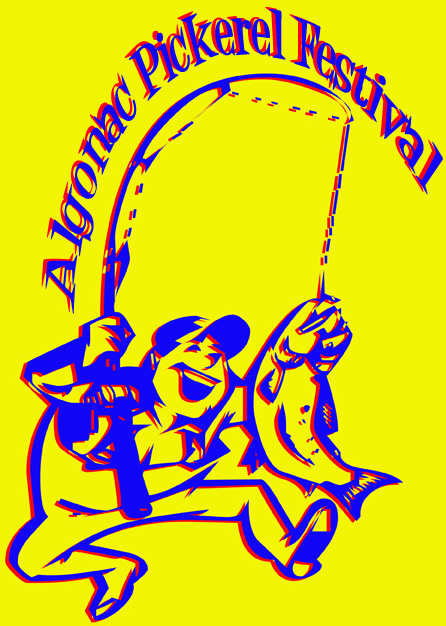 Now in its eighth decade, the Algonac Lions Club Pickerel Festival is one of the celebrations of its kind in the Blue Water Area. Running July 3rd  through July 7th, the festival not only includes daily cash prizes for the three largest fish but also a grand prize for the “whopper” which is awarded on the final day. There are also carnival rides, food, live music and fireworks throughout the weekend. Visit the Algonac Pickerel Festival website for more information and how to register for the tournament.

The best of luck to all the anglers out there. Fish on!

Find out about more summertime things to do in the Blue Water Area visit our events page.
Posted by Dale Merrill No comments: