Recently the Metro Times published a list on 21 weekend road trips for when you need to escape Detroit.  Among the more of well known destinations for one tank trips like Ann Arbor, Frankenmuth, Kalamazoo and Lansing, there were a few hidden gems. Two of those were the Blue Water Area communities.

Describing Lexington as a "community of cottages and kitsch on the shores of Lake Huron", the article mentions the village's shopping district, the wine making at 3 North Vines and the Blue Water Winery, the step back in time feeling a person gets when grabbing a bite to eat at the A&W as well the many concerts Tierney Park and the Lexington Village Theater host.


The Metro Times says Marine City is "everything you need for a relaxing afternoon is within a short walk of your car." The story makes mention of the many antique stores that dot the riverfront downtown district and their vibrant theater district (both live and motion picture.) There's also a special mention of the Sweet Tooth, because the vintage style candy shop garners a lot of votes in the paper's yearly “Best of Detroit” poll even though it's a little off the beaten path than most contenders.

See all of the Metro Times picks here.

What are your favorite places and things in Lexington and Marine City? What would you add to the list?
Posted by Dale Merrill 6 comments:

Tabelog, a website/blog which proudly declares itself a "lively online community for foodies, by foodies" covers sustenance in cities all over the country. While a lot of places are in the lager cities and metropolitan areas, they also give attention to eateries that may be a little off the beaten path that they suggest gastronomer's should check out.

In a recent post titled "Seven Of The Best Hole In The Wall Restaurants You Should Visit Across The US"  they raved about places that are specially great in their own local flavor way. The article included locations in Las Vegas, St. Louis and Los Angeles but topping the list was a place with very a familiar neon sign to anyone that has traveled on Port Huron's main drag, Palm's Krystal Bar.

Along with mentioning that their broasted style chicken is a favorite among locals, out of towners and international visitors alike and their shoestring potatoes are one of a kind, they also bring up how the bar area itself, bathed in neon and chrome, which to me is like taking a step back into the past and feeling like your on the set of Mad Men while sipping a cocktail or enjoying one of the fine Michigan craft beers they offer.

Palm's Krystal Bar has been serving the Chicken In The Rough recipe for hungry people since the late 30's. The recipe and cooking system itself, started by an Oklahoma couple Beverly and Rubye Osborne who, after picking up some fried chicken at a roadside stand and noticing the mess it made in the car, got an idea for good, fresh food prepared quickly and packaged in a way where it could be taken from restaurant to home with little fuss. Their idea is now considered the "meal that created food service and fried chicken licensing and franchising" and predates the giants of the industry such as McDonalds and Kentucky Fried Chicken by several decades. 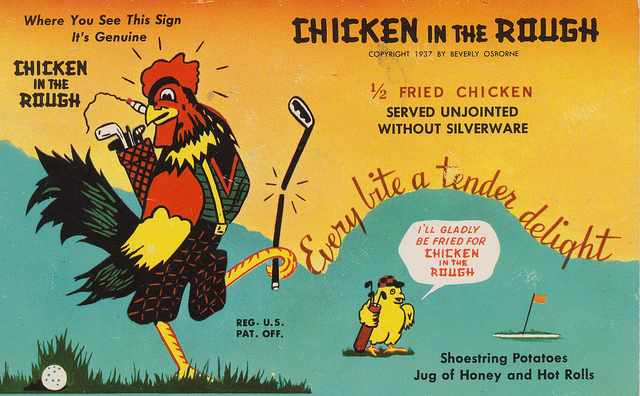 By 1950, the Osborne's had 250 franchised Chicken In The Rough outlets located not only throughout the United States and Canada but also in places like Johannesburg, South Africa.

Nowadays there are only three places in the world that hold Chicken In The Rough's special recipe (and some of the best comfort food style chicken & noodle soup you'll ever taste) and Palm's Krystal Bar is one of them. Check out their full menu here.
Posted by Dale Merrill 5 comments: